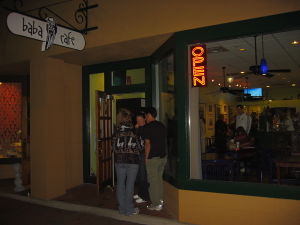 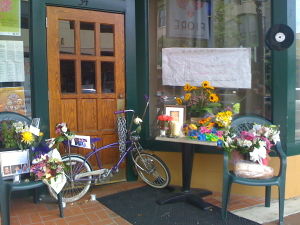 A memorial to John Ma was left outside the café after his death.

Baba Cafe was a restaurant located at 38 Palafox Place, formerly the site of the Breaktime Espresso Café. It was opened in 2007 by John Ma, former partner and sushi chef at Horizen, and was likely named for Baba Budan, credited for introducing coffee to India.

On April 10, 2008, Ma locked himself into a closet at the back of the restaurant and used a firearm to commit suicide. The store was open at the time, but it is unclear if any customers were in the building.[1]

The restaurant closed after Ma's death. It was replaced three months later by Dawn Ouwerkerk's Breaktime Cafe. "It's going to put a period at the end of it," Ouwerkerk said. "They took away the Baba sign and we're starting fresh. We're jumping back into Breaktime and back into good feelings."[2]