From Pensapedia, the Pensacola encyclopedia
(Redirected from 1906 hurricane)
Jump to navigation Jump to search 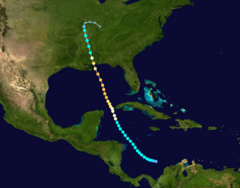 The hurricane of 1906 was the sixth storm of the 1906 season. At its maximum intensity, it attained Category 3 status with winds as high as 120 mph. The storm made landfall west of Mobile on September 27, 1906 as a Category 2.

Winds of 105 mph were experienced in Pensacola, and storm surge at Santa Rosa Island was measured at 14 feet.

An article published in the Pensacola Journal several days after the storm summarized some of the its damage:

This article is a stub. You can help Pensapedia by expanding it.
Retrieved from "https://www.pensapedia.com/mediawiki/index.php?title=Hurricane_of_1906&oldid=27963"
Categories: