Wyon Dale (W. D.) Childers (b. 1933) is a former West Florida politician who served 30 years in the State Senate, from 1970 to 2000, including a stint as Senate President from 1980 to 1982 and as dean from 1988 to 2000. He earned the nickname "Banty Rooster" — after the diminutive, swaggering barnyard fowl — and became known for his eccentric mannerisms and colorful, folksy expressions. Childers was popular in his district for the ample state funding and "turkey" projects he sent home, including $12.5 million for the Pensacola Civic Center and the I-110 extension to Gregory Street. Initially a Democrat, he switched to the Republican Party in 1995.

After term limits forced him from the Florida Senate in 2000, Childers ran for the District 1 seat of the Escambia County Commission. He became embroiled in the soccer complex corruption scandal and was found guilty of violating the Florida Sunshine Law and of bribing Commissioner Willie Junior to help push the purchases of two properties, totaling $6.2 million, from Childers' associates Joe and Georgann Elliott.

Childers served nearly three years of a 42-month prison sentence in West Palm Beach and was released on June 17, 2009, after which he relocated away from Pensacola. On June 8, 2010, a federal appeals court overturned the bribery conviction, ruling that Childers' constitutional right to confront his accuser had been violated, as the defense team was not allowed to question Junior on his change of testimony.[1]

Born on November 25, 1933 in Wright, Florida, then known as Crackers Neck,[2] Wyon Dale Childers attended from Bay County High School and went on to Florida State University, where he met Ruth Adell Johnson. They were married on December 21, 1953, and Childers graduated with a Bachelor of Science degree in education in 1955. He became a math teacher and supplemented his salary with roofing work and door-to-door sales. He capitalized on the sale of trendy items — hula hoops in the 50s, color televisions in the 60s — and also practiced real estate.

Childers, center, is sworn in to the Florida State Senate

In 1970 Childers ran for the Florida Senate seat vacated by Reubin Askew, who went on to become a long-serving governor of Florida.

Childers was for many years chair of the General Government Appropriations Committee, which established budgets for most of the state agencies. He was considered a master of so-called "turkey" projects that were tacked on to other bills and sent state funding back to his home district. Some of the local projects that benefitted from his influence included:

In 1980, Childers pushed the state legislature to buy land for the Big Lagoon State Park from Pensacola auto dealer . He was called before a grand jury when it was revealed that he owned another piece of property with Fiveash, and he claimed he had not made the "mental connection" between the two properties. The grand jury cleared him of wrongdoing and praised him as "an example to other public servants who, having sought the public trust, are asked to show that they deserve it."[3]

On June 1, 1981, an argument between Childers and Senator Dempsey Barron over a bill nearly resulted in a fight on the Senate floor. Barron later organized a group of legislators that effectively stripped Childers of his power as Senate President.

In 1993, Childers worked with attorney Fred Levin to draft legislation that would amend the Florida Medicaid Third Party Recovery Act, enabling the State of Florida to sue the tobacco industry for the costs of treating illnesses caused by cigarette smoking. The bill was pushed through quickly and signed into law by Governor Lawton Chiles before it could attract the attention of the tobacco industry's lobbyists. The legislation ultimately led to a class action lawsuit that yielded a $13.2 billion settlement for the State of Florida.

Due to the "Eight is Enough" constitutional amendment passed by Florida voters in 1992, which limited legislators' terms of office to eight consecutive years, Childers' name was not allowed on the ballot in 2000. He considered running for his Senate seat regardless as a write-in candidate, exploiting a loophole in the amendment's wording — and even received a concession from election officials that would allow voters to write just the letters "W. D." — but later decided to serve as Escambia County Commissioner for one term, until he could constitutionally reclaim his Senate seat.[2]

Childers ran for the Escambia County District 1 seat formerly held by Mike Whitehead, who was preparing a campaign to challenge Escambia County Clerk of Court Ernie Lee Magaha. Childers' opponents in the race were Democrat Williemae Stanberry and Reform Party candidate Teddy Laviano. Despite a commanding lead over both opponents, Childers ran a series of negative ads in the final weeks of the campaign.

After the election, Childers appointed Stanberry to an interim post on the Board of Adjustment. She said there were no grudges between them: "We never had a bad relationship — that's just the way W. D. does politics."[4]

On June 7, 2001, Childers replaced Tom Banjanin, who was considering a run against U.S. Representative Joe Scarborough, as commission chairman.[6] He organized a voting bloc with commissioners Willie Junior and Mike Bass that was able to pass any motion over the opposition of Banjanin and Terry Smith. After six county leaders resigned between October '01 and February '02 — county administrator Tom Forrest, assistant administrator Bill Neron, acting administrator Gregg Welstead, county engineer Cindy Anderson, parks and recreation director Mark Thornton, and county attorney David Tucker — many blamed the exodus on Childers' brusque leadership style.[3] It was during this same timeframe that Childers, Junior and Bass pushed through two contentious land purchases that would lead to indictments and scandal.

On October 4, 2001, Commissioner Willie Junior proposed, as an add-on to the commission agenda, to negotiate a purchase price for the Pensacola Soccer Complex. The motion was approved unanimously. On November 1, the commission voted 3-2 to use $3.9 million in local option sales tax funds to buy the property, and they formally closed on November 20. On January 10, 2002, Junior made another add-on motion to purchase the former Stalnaker Mazda property for $2.3 million, which is approved 3-2. In both votes, Childers and Bass affirmed Junior's motion while Banjanin and Smith opposed.

State Attorney Curtis Golden announced on February 7 an investigation into the commission over possible corruption related to the land purchases. In testimony before a grand jury, Childers revealed that he had written around $90,000 in checks to Commissioner Junior, but insisted they were "loans."

On April 30, four commissioners were booked into Escambia County Jail on 27 charges, which included bribery, racketeering, and violating the state's Sunshine Law. Governor Jeb Bush suspended the four indicted commissioners on May 1[7] and appointed temporary replacements on May 10. Former News Journal publisher Cliff Barnhart was tapped to fill the District 1 seat.[8]

Childers was charged with additional counts of money laundering and bribery on June 16, but was released from jail on $50,000 bond.

On June 28, he was convicted on one count of violating Sunshine Law over a call he and Commissioner Smith made to Supervisor of Elections Bonnie Jones over country redistricting. Meanwhile, Commissioner Junior pleaded no contest to 10 felony charges and one 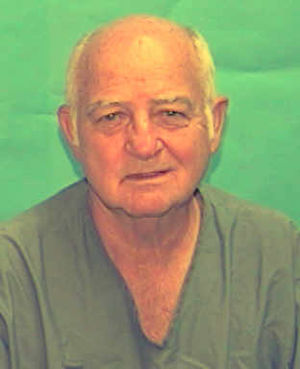 The Pensacola Soccer Complex had been purchased by Joe and Georgann Elliott for $3.3 million. The county purchased the property for $3.9 million, netting the Elliotts a profit of around $561,000. According to the state's allegations, they paid a bribe of $200,000 to Childers, who in turn paid around $100,000 to Junior. Junior testified that Childers had given him a stainless steel "collard-green pot" full of cash a few days after the county closed on the property, which he transferred to a paper bag at his home. He also claimed to have received $10,000 from Joe Elliott directly, the day before the vote to buy the property. Wanting to deposit some of the money in a bank, but fearful of the government reporting requirements of depositing cash, he returned $40,000 to Childers in exchange for a cashier's check for the same amount.[9] Junior later received several other checks from Childers totaling $90,000.

On April 9, Childers was found guilty of two charges of bribery and unlawful compensation.