Difference between revisions of "The Towers" 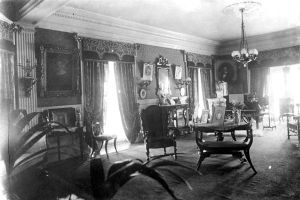 Interior of the Baars home

Cordova Towers (also known as Cordova or The Towers) was the name of the 14-room home and estate built by Henry and Mary Ellison Baars in (date needed). The house was located on the eastern shore of Bayou Texar, just south of the current Baars Park. It was named for the Spanish city of Córdoba, which the Baarses had visited in their travels. The oak trees that form the "tree tunnel" on 12th Avenue were planted as a driveway leading to the estate.

Mary Ellison intended to develop the surrounding area — from Davis Highway to Escambia Bay — with vacation homes for wealthy northerners. She had plans made for three-bedroom, one-bath houses that would range from $4,000 to $7,000 in price, completely furnished with groundskeepers to tend the yards.[1] She also envisioned a hydroelectric plant that would be placed in Carpenter's Creek. Baars died in 1923 before any work started, however, and the plan was scrapped when economic conditions soured; the Cordova Park neighborhood was eventually developed on the eastern side of Bayou Texar, and much of the estate to the north became the Cordova business district.

In the 1940s the Cordova Towers home was owned by Philip G. and Eleanor DuPont Rust of Wilmington, Delaware.[2] It was demolished in (date needed). Mary Firestone Baars donated the land for Baars Park to the City of Pensacola in (date needed).