I know, right! It's on display in the Historical Society's library, I did a Google search for the illustrator and found a digitized version straightaway. The numbers are a little blurry, but still! — admin • talk  11:30, 5 December 2009 (CST)

Speaking of the blurry numbers, I'm going to need help finding some of these. Just a few examples: I'm pretty sure the big cylindrical tower on Palafox north of Lee Square was a water tower, i.e. #7 Water Works Stand Pipe, even though it looks like #5. Not sure what the building on Guillemard and DeSoto is... I'd guess either the Water Works Pumping Station (since that's where the later Water Works Building was built) or the Gas Works. But the one on Tarragona between Cervantes & Strong could be either one of those too. Any insight? — admin • talk  11:38, 6 December 2009 (CST)

Yeah, that's definitely the Water Works Stand Pipe at Palafox and Cervantes. I am having trouble seeing some of these numbers. Is there a number around the structure at Guillemard and de Soto? I can't see one. I'd guess your guess is probably right though. The structure you're talking about on Tarragona between Cervantes and Strong is the little teeny thing on the NE corner of Cervantes and Tarragona? I'm not sure. — dscosson • talk  12:05, 6 December 2009 (CST)

Re: Guillemard & DeSoto, it looks like there's a number on the roof, resembles a 9, but don't think the Public School had a smokestack. Re: Tarragona & Cervantes, I think it's that whole complex, with the number 5 on the roof. The thing on the corner looks like some of cynlindrical wireframe structures I saw in an image search for "gas works".

#32 is mislabelled as the "I. M. Hilliard" carriage factory, when it is in fact the J. M. Hilliard Carriage Company. Our article for that places it at 30 East Garden which would place it on the north side of Garden between Palafox and Brue, but I can't see any numbers on that area of the map. — dscosson • talk  12:12, 6 December 2009 (CST)

Maybe. The source of the 30 East Garden Street address is the ad depicted on our J. M. Hilliard Carriage Company article. The even-numbered address indicates a building on the north side of Garden. For instance, Reynalds Music House [2] is 36 East Garden. 30 East Garden would be in the middle of the Jefferson Street extension. Of course, that ad with that address is from 1897, it's possible it moved between 1896 and 1897 but probably not. Alternately, it's possible that the 30 East Garden address from the ad was simply an office and the actual factory was elsewhere. — dscosson • talk  13:19, 6 December 2009 (CST) 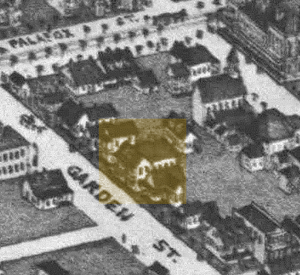 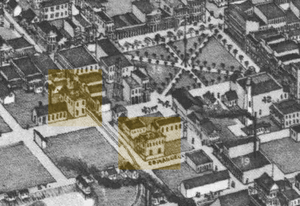 I still think you were right about 46 being on the wharf. The terminal company owned the streetcars, and those could be streetcar tracks by the building on Main. Anyway, that definitely looks like "45" on the roof. Not positive the other one is 44, but maybe. Do we have any other info on the location of city hall in the 1890s? — admin • talk  15:08, 6 December 2009 (CST)

OK this is weird. The 1903 Sanborn map indicates that City Hall is housed in a building on the SW corner of Zaragoza and Jefferson, immediately south of 17 East Zaragoza Street, which the Sanborn map labels as a cigar factory ... HOWEVER, the 1897 Sanborn map identifies 17 East Zaragoza as occupied by the Germania fire company and labels the building to the south as "City Court, Police & Jail." The building which I identified as a possible #44 on the image to the right is just labelled "Cigar Fac." in the 1897 Sanborn map. — dscosson • talk  15:52, 6 December 2009 (CST)

I just noticed that too. Our info shows City Hall was in that 405 South Jefferson Street building south of the Germania bldg from 1900-1908, which is consistent with the fire maps. But now that I look at the Koch map again, there does seem to be a faint "44" on that building, which means maybe city hall was moved there before 1900? — admin • talk  16:05, 6 December 2009 (CST)