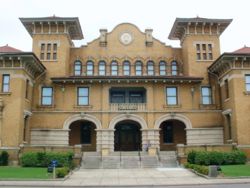 The T.T. Wentworth Jr. Florida State Museum is the museum of history in Pensacola. It is located on Jefferson Street adjacent to Plaza Ferdinand VII. The building is part of the Historic Pensacola Village museum complex.

The building, reminiscent of the Alamo mission style, was originally erected in 1907 to serve as Pensacola's city hall (which is now located at 180 Governmental Center).

The original museum was in fact a roadside stand owned by Wentworth, which opened in the suburb of Ensley in 1957. Wentworth was paraphrased as saying, in the 1980s, that he would donate everything in his collection if he could earn a permanent spot to house his collection in Pensacola. A state grant was signed by Governor Bob Martinez to allow the city to renovate the old city hall, and the museum was officially opened in 1988.

Only one floor is dedicated to Wentworth's eccentric collections — which includes a mummified cat, among other things. The other two floors illustrate life in the Florida Panhandle over the centuries, some of the more mainstream artifacts coming from Wentworth's collection. The other floors house a science interactive museum that is wonderful for children.

From September 2004 to March 2005, the museum was closed for renovations after Hurricane Ivan caused considerable damage to the property. When the museum opened again, a new exhibit was added, comparing and contrasting the effects of the 2004 hurricane to the 1926 hurricane that also damaged the building.