The Port of Pensacola is an operational deep-water port located on Pensacola Bay. With origins dating back to 1743, it is now one of the City of Pensacola's Enterprise Operations, having been incorporated in 1943 as the Municipal Port Authority.

The present-day Port of Pensacola occupies approximately 50 acres of landfill at the southern terminus of Barracks Street in downtown Pensacola, on the site of the former Commendencia Street and Tarragona Street wharves. The Port has eight berths, 265,000 square feet of warehouse space, and on-dock rail service.

The importance of Pensacola as a port city declined significantly over the latter half of the 20th century with the introduction of containerization to the shipping industry. Other Gulf ports such as New Orleans, Mobile, and Tampa, which can handle containerized traffic, have eclipsed the Port of Pensacola, which cannot. The decline in traffic has resulted in significant, sustained financial losses for the Port. Accordingly, the future of the Port has become a political issue, with groups such as Take Back the Port advocating its closure.

The first recorded export of commercial cargo from Pensacola, a shipment of pine and pitch products, took place in 1743. Pensacola's first private commercial dock was built in 1784. 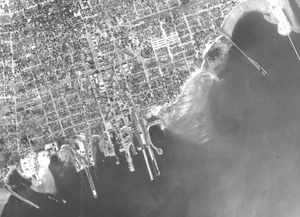 This 1940 aerial view of Pensacola's waterfront illustrates how Pensacola's port facilities looked in the first half of the 20th century, with Commendencia Street, Tarragona Street and Muscogee wharves intact.

In the early 1940s, the Pensacola Exchange Club hosted a forum called the "Civic Roundtable," where representatives from Rotary, Lions Club, Kiwanis, the Chamber, the Jaycees and others would meet to discuss business issues, among them the port, which was enjoying a wartime resurgence. The group pressed State Representative Dave Thomas to introduce a bill in the Florida legislature creating the Municipal Port Authority in the spring term of 1943. Its members were initially appointed by state senator and included J. D. Johnson, Henry Hilton-Green, Calvin L. Todd, William S. Rosasco, W. V. Fauria, Morris Levy, J. H. McCormack, J. W. Smith, Jr., Charles W. Smith, J. H. Allen and R. H. Turner, Jr. (Later members would be appointed by the Pensacola City Council, which also approved annual funding to the Port Authority, as it had no taxing authority of its own.) The group first convened on July 7, 1943 in Council's chambers.

This list is incomplete. Please add any available data.