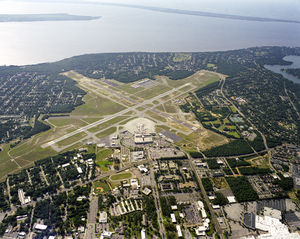 Pensacola Regional Airport prior to 2007-2009 expansion

Pensacola International Airport (IATA: PNS, ICAO: KPNS), historically known as Hagler Field, is a regional public airport located 3 miles (5 km) northeast of Downtown Pensacola. The airport is owned by the City of Pensacola, and is located wholly within the city limits, east of 12th Avenue/Tippin Avenue and north of Summit Boulevard.

According to the Airport's web site, Pensacola Regional Airport is the "fastest growing airport between New Orleans and Jacksonville". Tha airport served 1.5 million passengers in 2004. 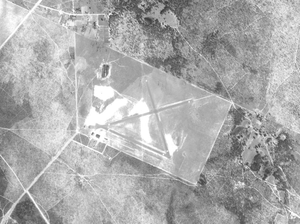 In 1933, Lee Conner Hagler and Harry Blanchard purchased 504 acres of wooded land northeast of the city. The two cleared space for two grass airstrips and erected a surplus Navy hangar. On April 7, 1934 the first commercial flight landed in Pensacola — a 14-passenger tri-motor Stinson from Atlantic and Gulf Coast Airlines. In 1935, the City of Pensacola purchased the airfield for $50,000 and made Blanchard manager.[1] With the help of the Works Progress Administration, the City of Pensacola developed Hagler Field into a permanent municipal airport. National Airlines began regular commercial service to Pensacola on November 1, 1938.[1]

The Navy took over command of the airport from 1942-1945, although civilian air service continued. The Navy constructed two new airfields and lengthened the existing two. A terminal and control tower were built in the 1950s. The first commercial jet plane — an Eastern Airlines Boeing 727 — landed at Pensacola's airport on August 25, 1965.

The airport terminal currently has 12 gates.

Southwest Airlines announced it will begin service from Pensacola, but it has yet to announce to which cities it will fly to.

On May 8, 1978 National Airlines Flight 193 landed in Escambia Bay due to pilot error.

On July 6, 1996, Delta Air Lines flight 1288, an MD-88, experienced an uncontained engine failure during takeoff. Fragments from the number one (left) Pratt & Whitney JT8D-200 turbofan engine penetrated the fuselage, killing two and seriously injuring one of the 148 people on board.