Difference between revisions of "Norma's"

Norma's is the name of three restaurants owned and operated by Norma Fleming Murray.

Located on the second floor of the Mens' Dillards in Cordova Mall. 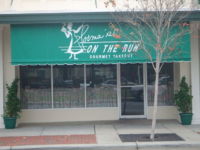 Norma's on the Run

Located in downtown Pensacola on Palafox Street, Norma's on the Run is primarily geared toward carryout business for the downtown business crowd, though there is limited seating inside and out.

Norma's on the Run is located at 28 North Palafox Street.

Located in downtown Pensacola in the Gulf Power Building, Norma's by the Bay is now the largest Norma's location. The restaurant has a terrific view of Pensacola Bay.

Norma's serves a variety of sandwiches, salads, and soups, in addition to other dishes and rotating specials.