Ivan caused catastrophic damage to Grenada, which it struck directly at Category 3 intensity, and heavy damage to Jamaica, Grand Cayman, and the western tip of Cuba. After peaking in strength, it moved north-northwest across the Gulf of Mexico to make landfall as a strong Category 3 storm near Gulf Shores, Alabama, causing very heavy damage. Ivan dropped heavy rains on the Southeastern United States as it looped across Florida and back into the Gulf of Mexico. The remnant low from the storm regenerated into a new tropical system, which moved into Louisiana and Texas, causing minimal damage. Ivan caused an estimated $13 billion worth of damage in the United States, making it the fifth costliest hurricane to ever strike the United States.

Hurricane Ivan marked a major point in the history of the Pensacola area. The level of damage, unprecedented even to an area accustomed to tropical storms, has had significant long-term effects on nearly all aspects of the community. 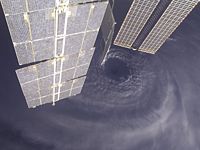 The eye of Hurricane Ivan as seen from the International Space Station on September 11, 2004.

On September 2, 2004, Tropical Depression Nine formed from a large tropical wave southwest of the Cape Verde Islands. As the storm moved to the west it gradually strengthened, becoming Tropical Storm Ivan on September 3 and it reached hurricane strength on September 5, 1150 miles (1850 km) to the east of Tobago. Later that day the storm began to rapidly intensify, and by 4 p.m. CDT, Ivan had become a Category 3 hurricane with winds of 125 mph (200 km/h). The National Hurricane Center noted the rapid strengthening of Hurricane Ivan on September 5 was unprecedented at such a low latitude in the Atlantic basin.[1][2]

Hurricane Ivan weakened slightly as it continued to move west due to wind shear present in the area.[3] The storm passed over Grenada on September 7, battering several of the Windward Islands as it entered the Caribbean Sea. Ivan began to rapidly intensify again and became a Category 5 hurricane just north of the Windward Netherlands Antilles and Aruba on September 9 with winds reaching 160 mph (260 km/h). Hurricane Ivan weakened slightly as it moved west-northwest, towards Jamaica. As Ivan approached the island late on September 10, it began a westward jog which kept the eye and the strongest winds to the south and west. However, because it still came very close to the Jamaican coast the island was battered with hurricane-force winds for hours.[1]

After passing Jamaica, it resumed its more northerly track, and regained Category 5 strength. Ivan's strength continued to fluctuate as it moved west on September 11 and attained its highest winds of 170 mph (275 km/h) as it passed within 30 miles (45 km) of Grand Cayman. Ivan reached its peak strength with a minimum central pressure of 910 mbar (hPa) on September 12, making Ivan the ninth most intense Atlantic hurricane on record, as of October 2006. Hurricane Ivan passed through the Yucatán Channel late on September 13 while its eyewall affected the westernmost tip of Cuba. Once over the Gulf of Mexico, it weakened slightly to Category 4 strength, but maintained that intensity as it approached the Gulf Coast of the United States.[1]

Just before it made landfall in the United States, Hurricane Ivan's eyewall weakened considerably, and its southwestern portion almost disappeared in the hours before landfall. Around 2 a.m. CDT September 16 (0700 UTC), Ivan made landfall on the U.S. mainland near Gulf Shores, Alabama as a Category 3 hurricane with 120 mph (195 km/h) winds. Ivan then continued inland, maintaining hurricane strength until it was over central Alabama. Ivan rapidly weakened that evening and became a tropical depression the same day, still over Alabama. Ivan lost tropical characteristics on September 18 while crossing Virginia and later that day the remnant low drifted off the U.S. mid-Atlantic coast into the Atlantic Ocean, and the low pressure disturbance continued to dump rain on the United States.[1]

On September 20 a small surface low, originating from the southern remnants of Ivan, completed an anticyclonic loop and moved across the Florida peninsula. As it continued west across the northern Gulf of Mexico, the system organized and took on tropical characteristics.[1] On September 22 the National Weather Service, "after considerable and sometimes animated in-house discussion [regarding] the demise of Ivan,"[4] determined that the low was in fact a result of the remnants of Ivan and thus named it accordingly. On the evening of September 23, the revived Ivan made landfall near Cameron, Louisiana as a tropical depression. Ivan finally dissipated on September 24 as it moved overland into Texas.[1] 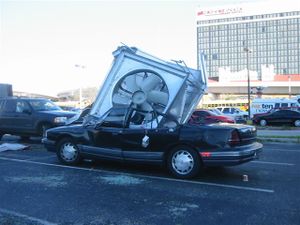