History of the Pensacola Police Department


“The Story of the Pensacola Police Department”

February 16, 1885, the Pensacola city charter was dissolved and replaced by a provisional government. Under the provisional government, the Pensacola Police Department, previously under the command of Marshal Mallett, was reorganized two days later. Joseph Wilkins was appointed the new Marshal and Chief of Police. From 1821 to 1885, law enforcement in Pensacola grew from one constable to a force of 16 police officers in addition to the sheriff’s department. Now, officers would be on duty all day every day!

When the new department was organized, it was determined that a more professional attitude would be taken. New rules and regulations for police officers were established. Among them: 1. Officers could not sit down while on duty.


2. Officers could not drink "spirituous liquor" in the police station.


3. Officers had to be able to read and write in English, never have been indicted and convicted of a crime, of physical health and vigor, of good moral character, and of unquestionable energy.


4. The more intelligent officers were stationed on the main streets.


5. An officer could not use his club or pistol except when he was protecting his life or if someone showed resistance.


6. An officer could not leave his beat unless he was taking an arrestee to the police station or for an emergency.


7. Officers could not visit bar rooms while on or off-duty.


8. An officer could not be absent for roll call more than three times a month.


As 1900 approached, a new development took place. The Department began testing officers periodically in their knowledge of the laws and the locations of businesses and streets in their areas. They were also required to be in excellent physical shape in order to perform their duties. About this time, officers began to work in teams of two. Partners were required to walk the streets for better protection. A local ordinance stated that if two officers were walking down a busy sidewalk and shouted, "Gang Way," people had to move out of their way. 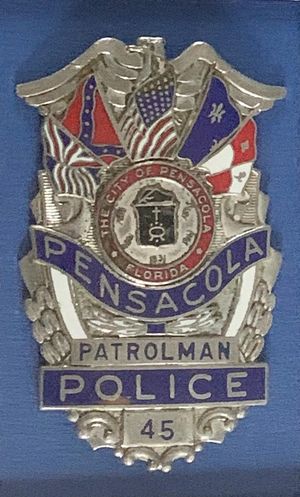 The Pensacola Police Shield
The Pensacola Police Department has one of the most unique and attractive shields in existence. Officers, badge collectors and historians worldwide have attempted to purchase them. However, they are not for sale. The only way to possess one legally is to become a Pensacola Police officer. Here is a summary of the symbolism found in this great shield.


City Seal: The seal of the City of Pensacola is in the center of the shield. This is a unique but symbolic item. The first thing one notices is the round circle, the five different dates, the black hand and pen over the black shield, and the symbols inside the shield.

For Pensacola police officers, this symbolizes the courage and freedom for which they fight. Each officer must earn the right to wear the shield, and each one wears it proudly.

Since its beginning, the men and women of the Pensacola Police Department have proudly served the citizens through the city’s rich history. That practice still exists today.