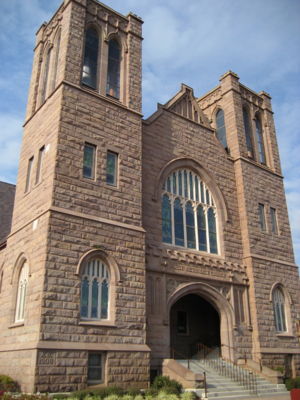 First Methodist Church was first established in Pensacola on 7 December 1821 as a mission of the Mississippi Methodist Conference, with the Reverend Alexander Talley as the mission's first pastor. Initially services were held in a courthouse and old theatre. In 1827, the church purchased a lot on the northeast corner of Tarragona and Intendencia Streets, and a permanent home for the church was built, with the first services held on 2 June 1828.

This first church building suffered two fires and in 1881 the property was sold and the church constructed a new facility on the northwest corner of Palafox and Garden Streets. In 1906, that lot was sold to make way for the San Carlos Hotel, and the church purchased its current site in. The cornerstone the church's current building was laid on 14 October 1908. Services were held at Hannah Hall on Romana Street until the current building was completed in 1910. Services were first held on 30 October 1910.