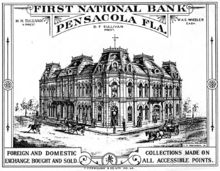 Advertisement for the First National Bank

The First National Bank of Pensacola was organized September 15, 1880, by brothers Martin and Daniel Sullivan. The initial capital was $50,000. It operated for several years out of the Pensacola Opera House, also owned by the Sullivan brothers.

In 1892, Francis Celestino Brent purchased a controlling interest of the Sullivans' bank and merged it with his own bank, keeping the First National Bank name. As the bank's operations and assets grew, Brent planned a nine-story office tower that would house both the bank and other businesses. However, with the construction of the Brent and Blount Buildings after the Halloween Night Fire of 1905, the need for office space was greatly reduced and the tower plans were scrapped. At this time, due to the demands of his other interests, Brent retired as president of the bank, passing control to his longtime officer, William H. Knowles. 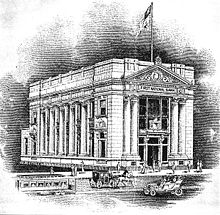 In 1906, Knowles arranged the construction of another building on South Palafox Street. The First National Bank Building, built in neo-Grecian style with rows of Ionic white marble columns, was completed on May 23, 1908.

On February 1, 1914, the Liverpool-based firm Crow, Rudolf & Company, which managed much of Pensacola's timber exports and in which the First National Bank had invested nearly a half million dollars, announced it could not meet its debts. Soon thereafter a federal receiver named R. W. Goodhart was sent to audit the bank. Despite having more than $400,000 on-site in its vault, the First National Bank was ordered to close.