Florida was transferred to the United States in 1821, yet Pensacola had no building in which to conduct affairs of the federal government for more than thirty years. Finally, in the 1850s, authorities selected a property on which to build a federal customs house. Proximity to Pensacola's wharfs was integral, but the chosen site was already occupied by William Kaiser's department store. Kaiser took the matter to court, but was unable to prove legal title to the land. The building was razed and the site cleared.

The three-story wooden custom house was built in 1854 for $60,000. The newspapers were critical of its unattractive architecture and high cost, and few mourned the building when it was destroyed in an 1880 fire. 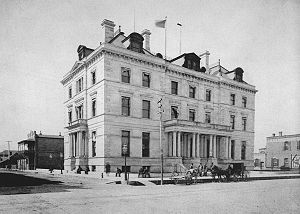 A replacement for the customs house was planned immediately. The new building would be larger — four stories high, plus a basement — and constructed of limestone.

The general contractor, M. E. Bell, discovered a substantial underground water flow during site excavation, which he solved by dropping in hundreds of cotton bales. The cotton is still at the foundation of the building. Masonry work was contracted to S. S. Leonard.

The building was completed in 1887 with dedication ceremonies led by postmaster C. C. Yonge. The post office was headquartered on the first floor; customs operations on the second; and federal court on the third and fourth.

In the 1930s, the growth of the federal government demanded a larger building. Likewise, the old courthouse at Palafox and Chase Streets was no longer adequate for county administration. A trade was negotiated between federal and county governments: Escambia County would take control of the Customs House, and a new United States Post Office and Courthouse would be built on the site of the old county courthouse.

County officials moved into temporary offices in the Blount Building between 1937-1938 while the building was renovated. County operations have been held there since 1938, with a western annex added in 1953. The building was supplemented by the M.C. Blanchard Judicial Building built in 1978. A major addition was constructed between (date needed) and 2007, replacing the old annex with a new Escambia County Government Center that connected the Courthouse with other government offices.

In 2008 a renovation project began that will restore much of the building to its original design, demolishing the second floor mezzanine and raising the first floor ceilings to 20 feet. The County has entertained plans to lease the upper stories to cultural organizations like the Arts Council of Northwest Florida and West Florida Historic Preservation, but the second phase of renovations has been delayed by a state suspension in historical grant funding.[1]