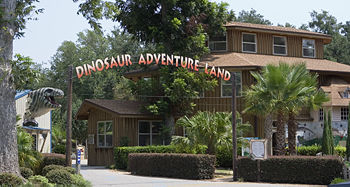 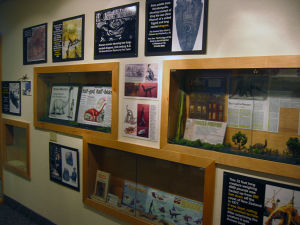 Most of the examples offered as evidence have been debunked for decades, like the photo of a rotted "plesiosaur" carcass caught in 1977 by Japanese trawler Zuiyo Maru, now widely believed to be a basking shark. The Park is unclear, however, on how the discovery of living dinosaurs might undermine the theory of evolution, which does not address the extinction of dinosaurs. 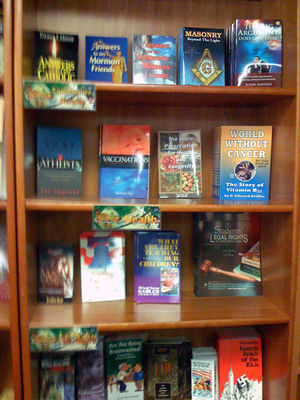 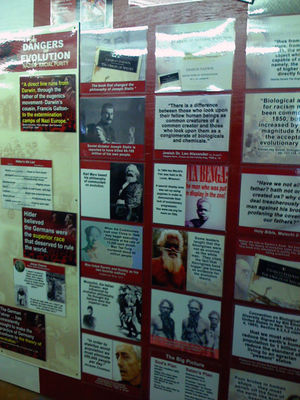 Hovind has been criticized by the Southern Poverty Law Center for selling books like Des Griffin's Fourth Reich of the Rich in the Dinosaur Adventure Land bookstore, and for recommending The Protocols of the Elders of Zion (an established hoax that has been widely used as a justification for anti-Semitism).[8] Hovind responded to this criticism, "I love the Jews. But The Protocols of Zion was written to explain how to control the world, I mean, it lays it all out. But it’s really carefully done so that if it is ever discovered the Jews take the blame for it."[9]

The Center also claimed that Hovind accuses Darwinism of having produced "Communism, Socialism, Nazism, abortion, liberalism and the New Age Movement,"[8] a notion that is reinforced by exhibits at Dinosaur Adventure Land that link Darwin's theory to the regimes of Hitler, Stalin and Mao.

As of August 2007, the Dinosaur Adventure Land bookstore still sells Fourth Reich of the Rich as well as other titles like The Pink Swastika, World Without Cancer: The Story of Vitamin B17, Vaccinations: Deception & Tragedy, and Masonry: Beyond the Light. 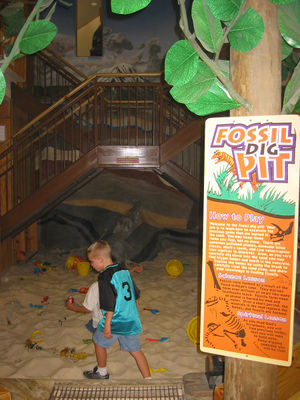 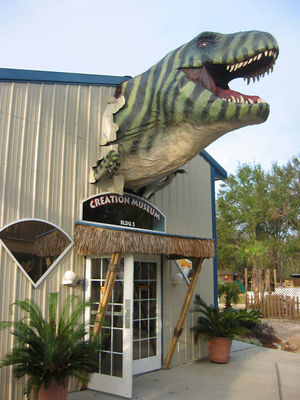 Hovind was charged on September 13, 2002, for failure to observe county zoning regulations with respect to Dinosaur Adventure Land.[4] Despite arguments that the owners did not need a permit due to the nature of the building, the park was found in violation of local regulations. Circuit Judge Michael Allen ruled the Hovinds in contempt of court, and the park's Science Center and Creation Museum buildings were locked up.[10]

According to the IRS, Hovind's theme park and merchandise sales earned more than $5 million from 1999 to March 2004.[16] About half of that income went to employees who were salaried or were paid hourly wages. The government believes that grew to the point of earning $2 million a year.[17]

Hovind and his wife paid no taxes on the revenue from the park. On July 11, 2006, Hovind was charged in the United States District Court for the Northern District of Florida with twelve counts of willful failure to collect, account for, and pay over Federal income taxes and FICA taxes under 26 U.S.C. § 7202, forty-five counts of knowingly structuring transactions in Federally-insured financial institutions to evade the reporting requirements of 31 U.S.C. § 5313(a), in violation of 31 U.S.C. § 5324, 18 U.S.C. § 2 and 31 C.F.R. sec. 103.11, and one count of corruptly endeavoring to obstruct and impede the administration of the internal revenue laws under 26 U.S.C. § 7212.[18][19] Twelve of the charges were for failing to pay employee-related taxes, totaling $473,818, and 45 of the charges were for evading reporting requirements by making multiple cash withdrawals just under the $10,000 reporting requirement (a technique known as "smurfing"). The withdrawals, totaling $430,500, were made in 2001 and 2002.[19] Jo Hovind, his co-defendant wife, faced 44 charges.[20]

At the time of the indictment, Hovind's defense appeared to be that although there were 30 people working for him, all of whom received remuneration in cash, none of them were employees. According to Hovind, "Nobody's an employee, and they all know that when they come. They come, they work ... The laborer is worthy of his hire -- we try to take the purely scriptural approach. We do the best we can with helping people with their family needs. There are no employees here."[21] Hovind had also claimed that he was not liable for taxes that and his ministry did not have to "render unto Caesar" because his workers are "missionaries" not "employees".[22]

The trial concluded on November 1 with the defense deciding not to present a case.[23] After closing arguments were presented on November 2, the jury deliberated three hours before finding the Hovinds guilty on all counts, 58 for Hovind and 44 for his wife.[24]