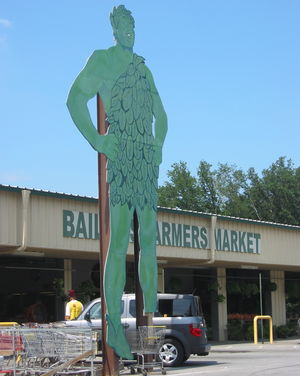 The Jolly Green Giant at Bailey's

Bailey's Farmers Market is an open-air produce grocery owned by Doug Bailey. It originally opened as Bailey's Homestead by his grandparents, Doc and Helen Bailey, in 1938, and was carried on by his parents Doc and Billie Bailey.[1] The market was located for many years at the intersection of Fairfield and Texar Drive. It moved to its current location at 4301 North Davis Highway in January 2004.

A 25-foot cutout of the Jolly Green Giant character, constructed by Lamar Advertising, greets visitors to the market. It replaces the larger 32-foot tall version that sat at the Fairfield location, but was too tall for City of Pensacola sign ordinances when the business moved within city limits.