Difference between revisions of "2001 Disco"

2001 Club, or 2001 Disco as it was often referred to, was a popular nightclub located on the north side of the Town and Country Plaza building on Fairfield Drive. It opened in the mid-1970s to cater to the latest disco music craze. It had a large dance floor, up-to-date lighting and effects, and two main bars. A smaller side bar called The Enterprise Room had a more intimate atmosphere, and often hosted small bands such as The Hi-Fi's, or the Instant Daddios. There were nightly drink specials, and best known was probably 'Welfare Wednesday', for the middle-of-the-week working crowd. During many of the clubs most productive years, 2001 Disco was managed by Richard Sarli.

Despite the mid-eighties waning in popularity of disco music, 2001 saw a rise in business with the closing of several live rock clubs such as Franco's, Jere's, and The Show Palace. In 1986, it was purchased by recently relocated California businessman Robert Martire, who managed the establishment until its closing in the early 1990s. 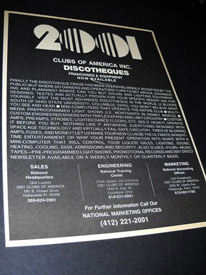